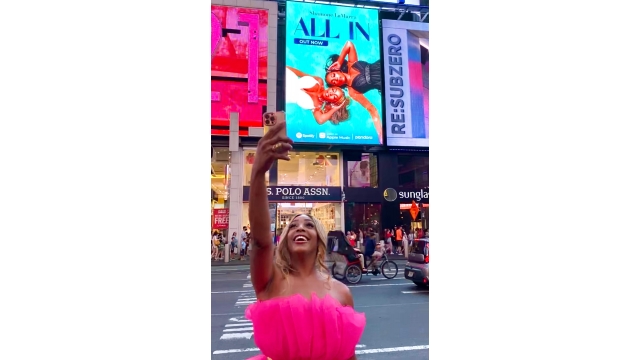 Fans were excited about her debut as a gospel singer during her Billboard unveiling in Time Square this past July 2022. Her new single “All In” aligns with her ambitions through her anointed voice. While many artists make music flaunting their luxurious lifestyle, Shamone LaMarra praises God for her success. She speaks about how her love for God opened doors and inspired her to transform her life.

“It took me a while to understand my message and master my sound,” LaMarra states. “I didn’t want to sing about another love song. Instead, I decided to let God’s love shine through my songs.”

LaMarra is a vocalist who’s taken many paths in the entertainment industry. She sang background on a 42-state tour with Devin the Dude, then later hit the stage for the Legendary music group “HTown” tour. In 2015, she featured on the hit BET reality TV show “Chasing Destiny” with Kelly Rowland.

“I realize now that my calling is to sing about overcoming trauma and experiencing true bliss through salvation,” LaMarra continues. “No longer am I holding back what God has done for me; I’m all in.”

“All In” is more than a song of salvation; it’s a movement to inspire people to go against the grain of what is socially acceptable. Just like David sang and danced in 2 Samuel 22 for God delivering him from the hands of his enemies, LaMarra encourages listeners to say “Yes” to God through the melodies of her lyrics.

Shamone’s versatility stretches beyond the microphone as she is a published chef, a successful entrepreneur, and an advocate for women in business. She is currently on a mission to use her voice to uplift her community and build an organization to help victims of child abuse. For more information, follow her on social media @shamonelamarra and stream “All In” on all music platforms.